Sentiment in the stock market is swinging to the dark side as trade tensions are blamed for fowling up a “global synchronized recovery”. But is that type of stock market natural? Should all markets across the globe go up at the same time for years on end? Doesn’t that mean there is no diversity when everything correlates in the same direction? Who has the power to suppress price volatility? Who or what could cause such a state of affairs? Kilroy? The Sandman? Easter Bunny? Under Dog? Spanish Fly? It’s a mystery inside an enigma. Perhaps economist David Rosenberg from Gluskin Sheff can enlighten us from a tweet he sent out this week:

In other words, the Fed has a great deal of influence to create any type of economic environment that it wants – but only for so long. Why does the Fed do this? In times of stress, the Fed provides a crutch to capital markets until the economy heals itself when it is ready for the Fed to reverse policy and withdraw stimulus. As long as the Fed isn’t too aggressive, this approach can work. However, when the Fed gets too aggressive it creates a bubble that will be popped by the laws of economics and mean reversion. This is what happened in the real estate markets from 2002 to 2005 that eventually led to the financial crisis of 2008.

We are in unchartered waters when EVERY central bank on the planet has followed the Fed into a very aggressive central bank policy of ultra low interest rates and expanded balance sheets. These policies are beginning to reverse now with the Fed leading the way. Will stock markets hold up? How high does GDP have to be to buffer the reversal of the Fed’s policy? I don’t think its the 2-3% growth rate we are seeing now.

Prices never lie so let’s take a look at a few charts:

Small capitalization stocks are pulling back..

Technology has been weak, especially the semiconductor sector…

I always leave the door open for alternate scenarios but this past week of price action makes me believe that the stock market will struggle in the coming months. 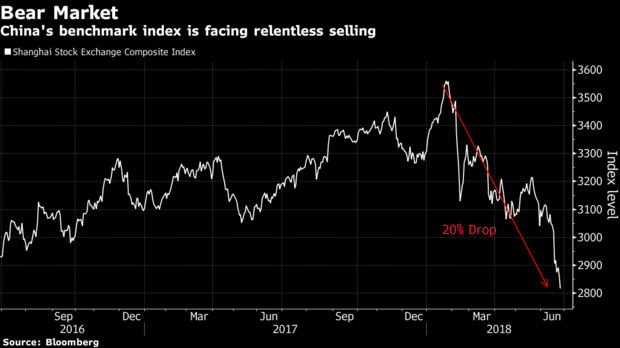