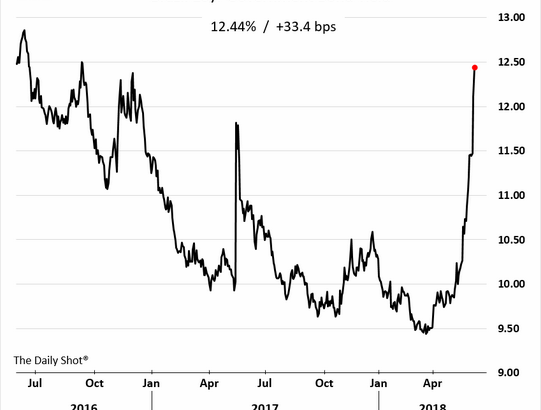 The U.S. stock markets continued to move higher as we move past the Q1 correction of 2018. However, there was a hiccup on Thursday as the Brazilian stock market dropped 8% in one day! Why? As U.S interest rates move higher there is a butterfly affect on emerging economies that link their currencies to the US dollar. As interest rates rise so does the value of the US dollar verses the local currency of Brazil, in this case. In order to maintain exports to the USA, the emerging economy is forced to devalue its local currency which in turn causes inflation and local interest rates to spike to stem the devaluation of the local currency. The chart below shows what happened to Brazil’s 10YR bond yields and you can see how dramatically their interest rate complex rose thus causing a drop in the Brazilian stock market. This is a downward spiral that can be very tough to break for an emerging economy so this tough situation for Brazil and other emerging countries will continue as long as the dollar continues to gain strength. It is very likely that the Brazilian stock market could fall dramatically in the coming year given the relationship with the US dollar is unlikely to end in the near term.

What happened with Brazil illustrates how inter-connected the policy of the Federal Reserve is to the global economy. The Fed is uncorking their ultra-low interest rate and quantitate easing program and we will now see how volatility eventually returns across the globe. We will see more examples of this in the coming 1-2 years and it is likely that the next recession will be global and emanate from interest rates, currencies and central bank policies. We have spent decades becoming inter-connected and this is one of the early tremors before the piper comes to collect his payment. We are also seeing this in developed countries like Italy and Japan but the effect is much less pronounced, for now. Brazil’s performance this week is a good example of what could unfurl over a longer period of time for the developed countries wrestling with a secular shift to a rising interest rates environment.

In contrast, Brazil’s affect on the U.S. stock markets was fairly short lived and I expect that we will continue to see good things from technology and the S&P 500. Below is a chart of what happened this past week in the S&P 500.

As I mentioned last week, the technicals are shaping up to be positive for the U.S. markets as we move into the summer months. The triangle in this chart is showing growing evidence to be complete which implies new highs in the U.S. stock markets. Tough to know how long this move lasts but it should be several months (at least).