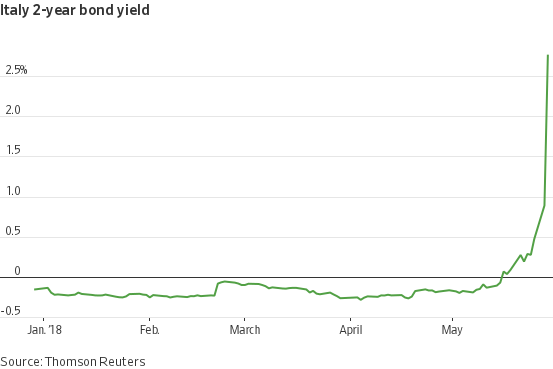 A good close on Friday for the stock market after a tester on Tuesday that was caused by a dramatic rise in Italian interest rates.

The rise was caused by a change in the leadership of the Italian government where the new leadership is skeptical of continued participation in the Euro zone experiment that has evolved into a nanny state. Why so skeptical? High unemployment and a sluggish economy stuck under a Euro where Germany is the biggest beneficiary. There are talks of leaving the Euro but for now the new Italian government may prefer to issue a parallel currency called the ‘mini-BOT’ used to pay off individuals and companies who are owed money by the state as payment for services or as tax rebates. It is not a done deal but if issued it would be one foot out the door towards exiting the EURO currency. Elections have consequences and they may be the most significant in Europe but there are others coming up, here are a few:

We will be back to Italy and the Euro zone in the future. For now, the local Italian banks and the ECB bought up all those higher yielding Italian bonds after Tuesday so the crisis is “over” while the politicians in Brussels groom their next Manchurian Candidate to lead the ECB.

The US stock market was good this week and I think we are about to move higher in the broader indices led by the NASDAQ whose sub-sectors were among the strongest on Tuesday’s sell-off. Let’s take a look at how we ended up:

The S&P 500 is trying to make a break higher which is likely in the next 1-2 weeks. Here is the chart:

A triangle is a continuation pattern which means that the uptrend from the 2009 low is likely to continue in the coming months. This may be the last leg of the bull market but it may present some very good investing opportunities in some of the stronger sectors such as technology. How long will it last – much tougher to use technical analysis to predict that but it should last several months. Just a few more sessions and the S&P 500 should get moving towards new all-time highs. Ciao to the correction of 2018!