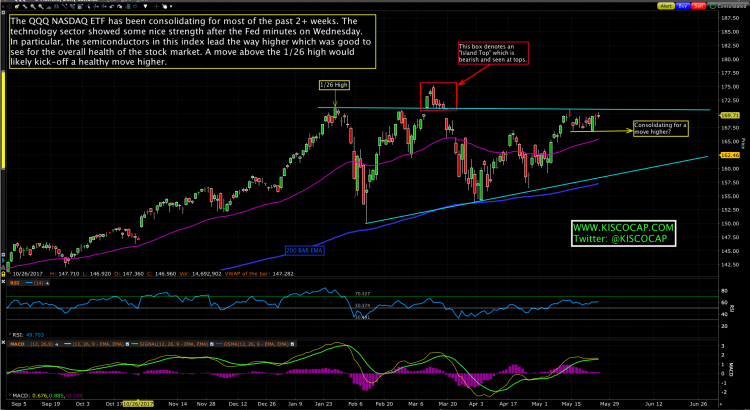 Back to the grind after a long holiday weekend. The stock market and interest rates behaved last week so perhaps we are seeing some consolidation before the next move in either direction. The small-cap growth stocks have been in the pole position and leading the market higher these past few weeks, see below.

The Fed released its minutes this week and interest rates pulled under 3% so a runaway 10 year yield is not happening in the short-term. No reason for the stock market to panic over interest rates.

The technology sector has been steadily moving higher since early May and may now be on the verge of a breakout.

Which leads us to the S&P 500 which may have stalled out and looks to be a coin-toss as to the next move.

Overall, a bit of a mixed picture with signs off strength in technology, semiconductors and biotechnology. There is nothing of significance on the calendar right now so it is likely that the stock market will complete the triangle pattern you see in most of these charts – either way it will be a big move. I was encouraged by the semiconductor index showing strength this week which is the heart of the technology sector as computer chips are in everything these days. A shortened holiday week is coming up so it may be sleepy but things could be interesting in the International arena as news out of Europe (Italy) and Asia (North Korea) will govern the headlines (read more below).