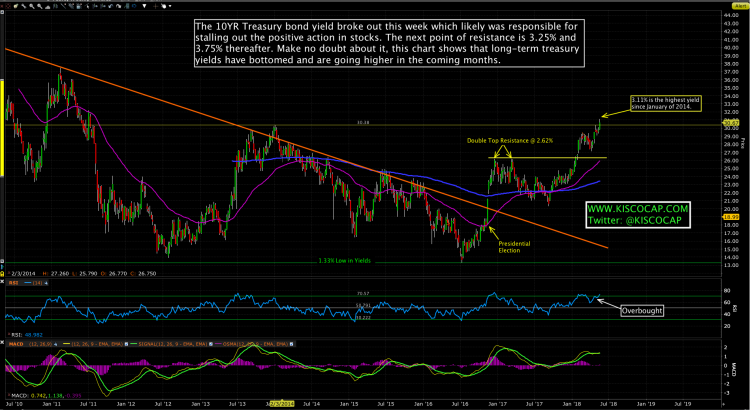 The stock market lost its mojo this week as the 10Yr Treasury bond yield made new multi-year highs which gave the stock market pause. The Fed is withdrawing its liquidity and raising interest rates which will normalize the interest rate complex – something were have not seen since before the financial crisis. Let’s take a look at this multi-year chart where you can see the breakout to the upside in 10YR Treasury bond yields:

Stocks started the week strong and then faded on Tuesday with lackluster performance. In the following charts you can see the NASDAQ and S&P 500 broke through their triangle patterns to the upside but quickly lost momentum. A head fake to the upside? Not uncommon when you analyze these technical patterns. Perhaps there is one more test to the downside before making new all-time highs or maybe the bull market topped in January. The answer is nigh.

Funny enough, the Russell 2000 made new all-time highs this week. Although nice, it needs to be confirmed by the other indices as no major index goes higher in its own vacuum. See chart below:

So, there you have it. Long term bond yields breaking higher and a stock market that is increasingly showing signs of another move lower. A move higher would be nice but hard to trust without it being a “kickoff” type of event to the upside.