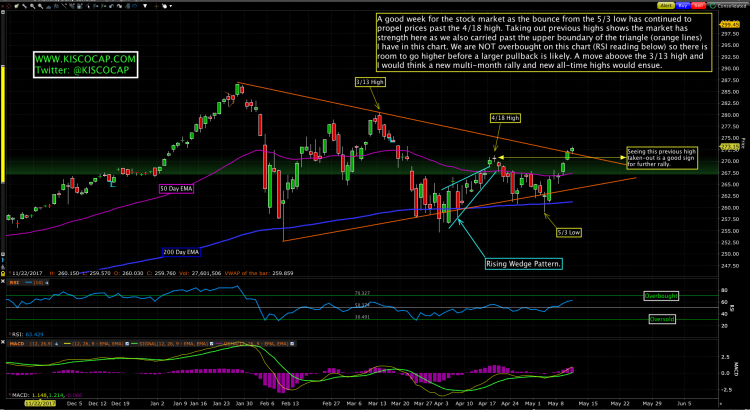 The stock market had a good week and we may be carving out the beginning of a new uptrend as earnings season begins to wind down. In general, earnings were good so corporate America continues to chug along while the Fed raises interest rates and inflation begins to become part of the 2018 narrative. Inflation can be a tricky variable for corporations as they may be unable to pass along input costs to their customers which would pressure their margins and profitability. However, I think we need to see that theme build up over a few quarters before concluding margin pressures will result in lower stock prices later in 2018 or 2019.

To review the technicals, the broader indices have been in a corrective pattern since a high that was achieved in late January. There is some evidence that this corrective pattern may be going into hibernation as the last test of the 200 day on May 3rd has resulted in more than just a bounce. Volatility levels in the $VIX index are also coming back down which signals a positive undertone to the price action in stocks. Let’s take a look at this week’s daily chart of the S&P 500 to see what is going on (each candlestick in this chart represents one day, by the way):

I will present more charts next week for a more comprehensive review of the major indices. This corrective pattern since January seems to be coming to an end across the board so next week’s charts should be important for how the remainder of 2018 plays out in the stock market.