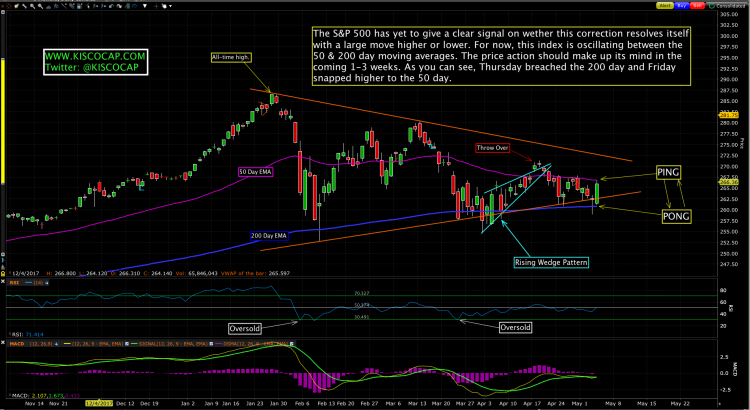 No answer just yet but for those that are just tuning in, the major indices are still resolving the technical breakdown that occurred in early February. We should have an answer soon but, for now, we are stuck playing ping-pong between the 50 and 200 day moving averages as you can see in the chart below:

Either way, we should get a large move from this technical pattern. Unfortunately, the technical pattern in the chart allows for a large move in either direction depending on your interpretation. A contracting triangle which I have above, implies a much larger move higher. The other interpretation says the bull market ended in January and the up/downs in the chart pattern above are a pre-cursor to a collapse once we break below the low ticked on February 9th.

Back to the fundamentals. Both the jobs report and the ISM released this week point to higher input costs for corporate America which may lead to lower profitability (earnings) due to inflation. The paradigm of rising interest rates and inflation at the same time is something the stock market has not wrestled with for decades. Comparables to 2017 earnings in the second half of the year will be tough if inflation continues to challenge margins. The other side of the fundamental coin is that tax cuts for corporate America spurn large amounts of investment that have a multiplier affect on the economy and we get GDP running well above 3%.

I will admit that the technical pattern will be much easier to analyze once we break higher or lower – more on that down the road.