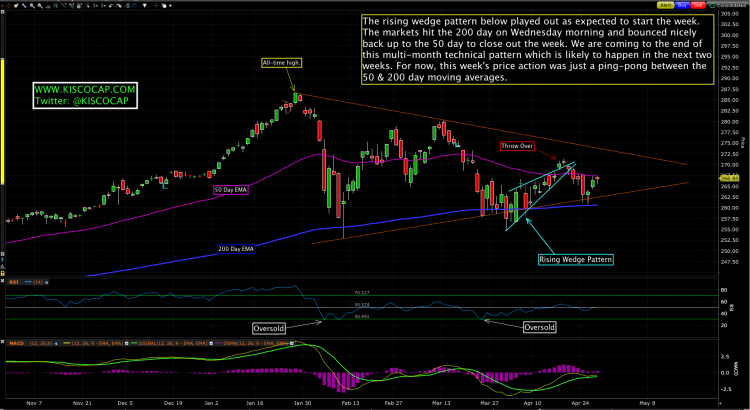 We are in the midst of earnings season and they have been largely better than expected. However, not all stocks have had the best reactions for a myriad of reasons. Amazon and Facebook posted good numbers AND price action so there is still hope for this market to make a run at new highs later this year. Other sectors like Airlines and Industrials had a tough week, however. In the mean time, we played ping-pong between the 50 & 200 day moving averages this week of the major indices but the good news is we tested support and didn’t fail. Let’s look at the chart of the S&P 500 ETF ($SPY) to see what happened:

We also got a test in 10 year Treasury bond yields this week which held so a new range may have been established with an upper boundary of 3.03%. Let’s take a look at the chart that shows an index of 10 year Treasury Yields:

The market is holding it together despite the weak technicals. There is good Macro data (GDP – see below) and earnings are good due to the new tax policy and increased capital investment. But we still have to contend with Fed policy, rising interest rates and a reduction in their balance sheet (reversing quantitative easing). The Fed has never hiked this late in the business cycle so they are threading the needle between new fiscal and monetary policies. Are they that good?

Around the world, there are now between 390 and 400 large scale data plants, so-called hyperscale centers. According to data by the Synergy Research Group, 44% of those centers are located in the United States. The next most prominent locations are China, Japan and the UK, which together account for another 20% of the worldwide total.

Hyperscale data centers are considered to have a minimum of 5,000 servers and are at least 10,000 sq. ft. in size but are often even larger. The data in the chart considers operations by 24 of the world’s major cloud and internet service firms, including Amazon/AWS, Microsoft, IBM and Google, Oracle, Alibaba, Apple, Twitter, Facebook, eBay, LinkedIn, Yahoo and Tencent, Baidu.

All the countless terabytes of our data is stored in vast data centers operated by the companies behind the cloud services of our choice. North American data center investment nearly tripled in 2017. At $20 billion, last year’s investment exceeded that of the previous three years combined and there’s little indication for this upward trend to end anytime soon.