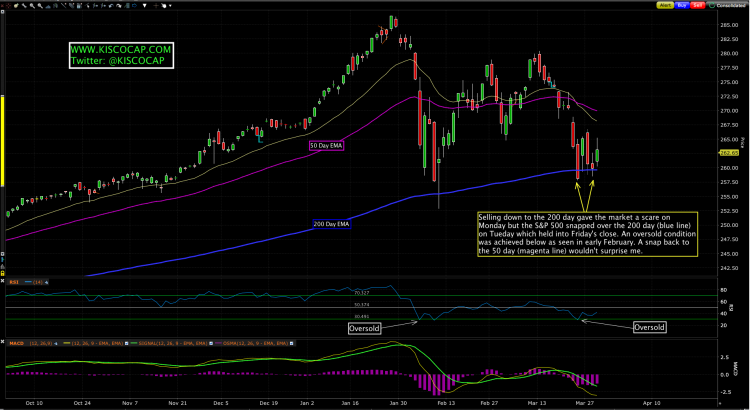 This past week has been very choppy, unpredictable and taxing to those who watch the tape. The good news is that we tested the 200 day for most of the week and it held with a good close on Thursday to end the first quarter of 2018. Wether we crash from here or re-gain our footing for a bull market in 2018, Q1 of 2018 will be remembered as a turning point. New tax policies, re-negotiated trade deals, a new Fed Chair and rising interest rates have all been ground zero for increased volatility for equity AND bond markets. Keep in mind that the all-time low in volatility has transpired in both equity and debt markets through the Yellen and Bernake eras so there is a big risk adjustment going on among investing professionals and their investment process. Rising credit risk will be the new normal for the bond markets which is a healthy thing as it will impose better financing discipline among corporate America. But the process of change creates uncertainty with a stipend of rising volatility – a transitory period for the professionals.

Remember, we are still working off this correction from earlier in Q1 so we may have ended this volatile period with a test of the February low this week. A few more days and we should know for sure (good or bad). Notice what happened after the last time we hit an oversold condition in February on the Relative Strength Index (RSI) in the chart below. A double test of a low is very common when you analyze charts – I think it holds. The Bears had their chance this week and couldn’t get the job done.

Happy Easter and Passover from the McCarthy clan!

Chart (s) of the Week

Funny, India looks a lot bigger on a globe…

But here we see the most densely populated cities….