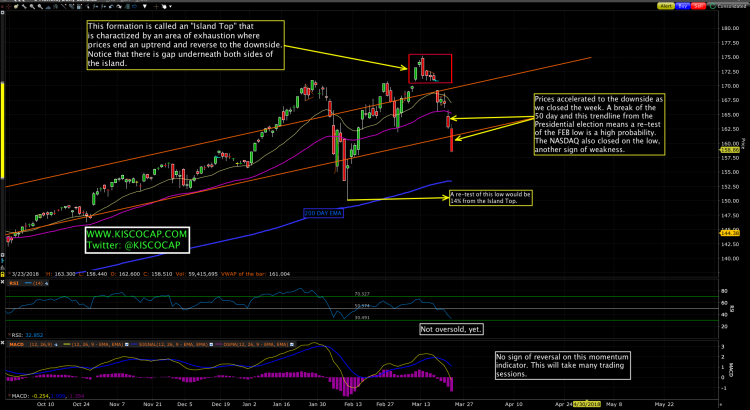 The stock market continues to try and resolve the technical wreckage from the sell-off that occurred in February after a top in late January. In many cases, you will see stocks test a bottom twice before finding a base and continuing to move higher – a double bottom. Will we find a bottom or is a larger sell-off at hand where the stock market goes bust and ends a larger uptrend from the 2009 low? How did we get here? Well, after a better than expected jobs report earlier this month, we had a nice move higher  which failed to manifest into a larger recovery among all the major indices. Only the NASDAQ has made a new high since January – which ended abruptly on Monday. This week’s open was foreboding as stocks gapped lower indicating the run-up after the payroll report was one big head fake. What was left was a topping pattern called an “Island Reversal”.

Let’s take a look at the NASDAQ ETF ($QQQ) to understand how this all fits together:

I expect to see the 200 day tested next week as the selling accelerated into the close and the big red bars in this chart come in sets of three many times so perhaps we bottom by Tuesday.

Alternatively, the S&P 500 closed below its 200 day moving average (a key level it needs to hold). Let’s take a look:

The DOW has been the weakest index these past two weeks (making a lower high) and closed right on its 200 day, see the chart below:

So why is this happening? Big picture, the end of ultra-low interest rates and debt. Speaking of which, the Federal Reserve had its first meeting under new Fed Chair Jerome Powell on Wednesday where the committee continued its policy of raising rates into a recovering economy. However, many economists have been downgrading the prospects for growth in Q1 from what was 3%+ in January to now 1.8% as we near the end of the quarter. This is where the fundamentals may fail the stock market. This economy needs to see 3%+ growth because the Fed is going to raise interest rates in 2018 3-4x.

Are there any fundamental warning signs out there?

Corporate Bond Spreads are widening which signifies rising default risk. Or, maybe spreads are coming off an all-time low and are widening in tandem with the Fed’s normalization policy. All the same, the spread widening is significant and can’t be ignored taking into consideration how much debt has been created as a by-product of the Fed’s ultra-low interest rate policy. Take a look:

The Libor-OIS Spread – what is it? The LIBOR-OIS spread represents the difference between an interest rate with some credit risk one that is risk free (like a T-Bill). When this spread widens, it’s a warning sign that there is growing credit risk within the financial sector. Prior to the financial crisis, the spread between the two rates was as little as 0.01 percentage points. At the height of the crisis, the gap jumped as high as 3.65% and acted as an early warning detector. This chart illustrates what happens when the credit risk of banks come into question:

So, what is happening to this spread now?

The spread widening may be attributed to technical factors such as funding pressures from increased T-Bill issuance from the Treasury, balance sheet reductions by the Fed and reduced demand from US corporations that are now re-patriating their cash due to reduced tax rates. Nonetheless, increased borrowing costs hurt everybody all the same so this spread can’t be ignored. Is this increased cost being factored into the stock market?

I’ll keep digging for details and report back what I find but keep in mind that interest rates are a powerful force that affect how stocks are valued. The stock market action will be very telling next week so hang on and keep liquid!