The next two weeks will be critical for the stock market. The bounce from the 2/9 low ended this week and now comes wether we test that low or hold this three+ week uptrend. Let’s take a look at an updated chart for the S&P 500 to get an idea of what might happen:

As you can see in the chart, we found support on Friday as there was an elevated amount of pessimism as measured by the number of puts bought to hedge or speculate we were going straight down to the 2/9 low. This type of activity typically portends a reversal to the upside unless there is a fundamental catalyst that evidences a crack in the economy (didn’t happen). Now we have a pivot to measure from as we likely move to the upside early next week that will run-up against strong resistance. Then what?

A re-test of the 2/9 low could get ugly if that level is breached as it would bring in more sellers and call into question the end of the bull market.  The flip side is that we pull back, find support and move towards new highs which would imply several more weeks (or months) of upside in stocks. It is hard to put a finger on a catalyst for a bear market or a recession but I suppose a dramatic fall in stocks could precipitate a slowdown in the economy given that low interest rates have been a freebie for consumers and corporations alike for many years – perhaps, something like a hangover from a sugar high.

I think the base case is that 2018’s price action is all part of transitioning period to rising interest rates and higher inflation. Volatility should be expected in these times of transition so let’s see if the market can make up its mind and send a clear signal in the next several trading sessions. By the way, interest rates are behaving and didn’t move much at all this week so I’ll have an updated chart for next week.

Chart of the Day!

Going to the bathroom to use your phone again? 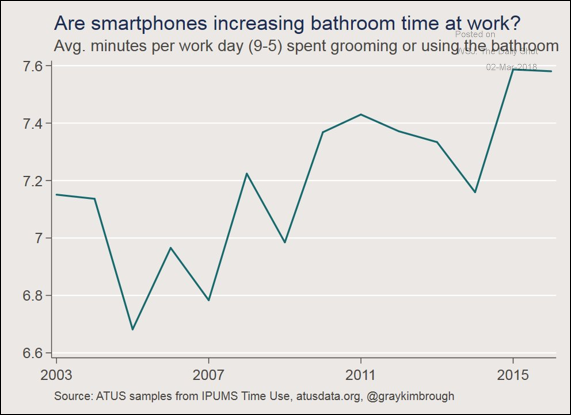