The Dow and S&P are ticking new highs despite the news out of North Korea and the weakening uptrend within growth stocks. We also saw the two worst performing sectors of 2017 (retail and energy), help push the overall indices higher as they bounce within their bearish down-trends. The growth companies in the NASDAQ are stalling out and have chopped slightly higher since June. Not a great technical sign (more in the chart below).

It is also September, which is a seasonally weak part of the year and we have the Fed meeting on Wednesday. This week is important as the Fed may begin to remove the punchbowl of low interest rates and quantitative easing that has been the lifeblood of debt issuance and stock buybacks. I doubt the Fed does anything dramatic but their statement on Wednesday may cause reality to set in for the broader markets that the party may be over.

We saw higher inflation readings this week which is what the Fed has “wanted” for some time so they may have painted themselves into the corner with their credibility. Can they keep this much stimulus in the system now that we have GDP near 3% and inflation readings picking up? Probably not. I am sure there will be some nervous Fed governors at this meeting as now they have to start facing the reality of the withdrawal of their polices in the coming months.

Don’t forget about all those promises of changes to tax policy and healthcare that ignited the Trump rally after the election. It will take a miracle for these to happen in 2017. A lot is riding on the next few weeks so expect some headfakes and a clearer picture of reality by early October. Good luck.

There isn’t much change from last week’s charts for the DOW and S&P 500 so I just included the NASDAQ this week. This tech heavy index typically leads the stock market higher and it is now stalling out. Despite the S&P 500 and DOW ticking new highs, the NASDAQ is sending a message that its uptrend is weakening and may lead the market lower. The DOW has been leading us higher these past few weeks which tells me stock investors are seeking “safety” in the larger companies. Not a great sign for the overall market as stocks trend best when growth companies and indices like the NASDAQ lead the way higher. I expect an answer in the coming week or two when we have some clarity around the Fed meeting on Wednesday. 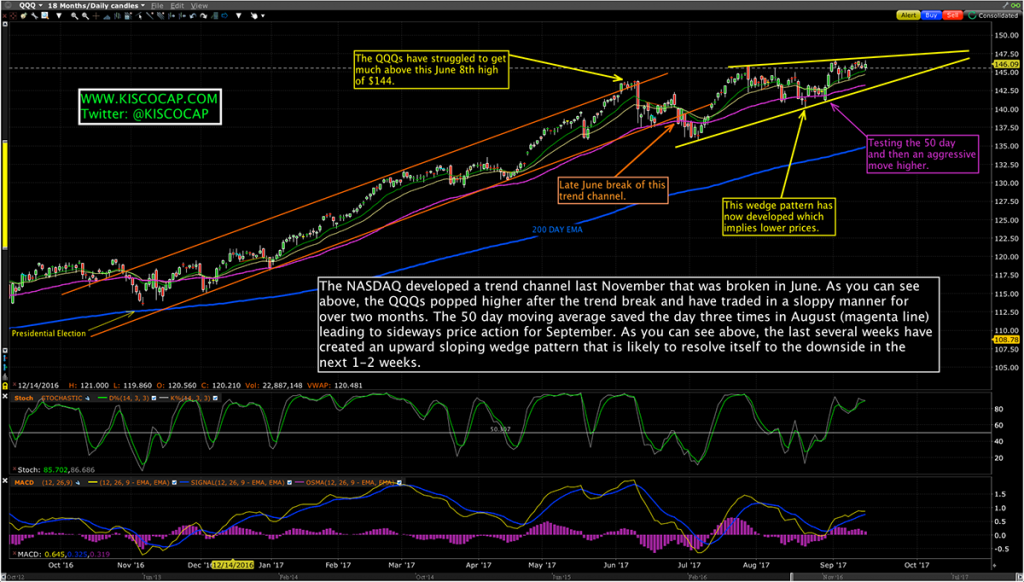