This week was fairly boring in terms of price action but there is plenty that is bubbling under the surface. Between politics, central banks, interest rates, “OK” earnings and international military risks we have many trigger points to consider as we roll into the Fall. Will Congress pass anything worthwhile for the markets to sink its teeth into? Don’t forget the upcoming showdown over the debt ceiling and the open enrollment in October for another year of Obamacare that was supposed to go away. 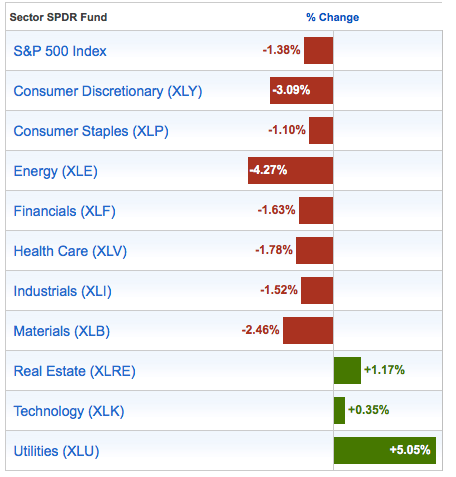 The short term in stock prices may be a coin-flip but there are many trigger points to consider as Q3 comes to an end in September. One way to look “under the hood” is to monitor the sub-sectors of the S&P 500 as certain sectors tend to peak before the broader markets (like the industrial sector). The chart to the right lists these sectors and their performance over the last month. Healthy markets aren’t led higher by defensive sectors like utilities or real estate.

There is a shortened week of trading coming up due to the holiday so the current see-saw nature of the markets may not get resolved until September.