Nobody hits a bell at the top of the market but you can identify symptoms of a top from how stock prices are behaving from their charts. One variable to consider is time as markets are cyclical which means their uptrends only last for so many years before a sizable correction occurs. There is no doubt that the Fed with its ultra-low interest rates and $4T balance sheet have added to the strength of the uptrend since the 2009 low. The sunset of this policy is on the 2017 horizon as the Fed begins to raise interest rates and withdraw the liquidity from the financial system. We will know more at the Fed’s next meeting in mid September. Until then, Janet Yellen will be giving a speech later this month at a conference (Jackson Hole) which may hint at the Fed’s next steps. 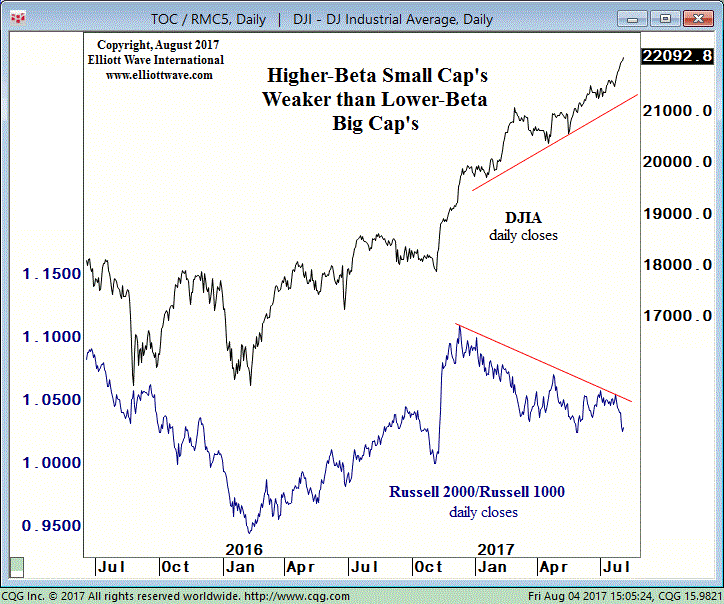 So what are the prices of the major indices telling us now? This chart from Elliott Wave International demonstrates investors are leaving speculative stocks and buying large-cap blue chip stocks. In the chart, the more speculative Russell 2000/1000 ratio made a high in December of last year while while the Dow has continued to rise – a “divergent” state as noted by technical analysts. A healthy stock market is one where all four major indices
trend higher at the same time and growth companies outperform their sleepier cousins that comprise the DOW and S&P 500. In other words, investors want “safe” stocks and not speculative stocks – a sign that we are in the very late stages of a stock market rally that began in 2009. Does this indicate a recession is around the corner? Maybe, time will tell but it does mean something really good needs to happen in the next few months to synch up all the indices to the upside and make this a “healthy” stock market again.

Let’s take a closer look at the NASDAQ which is largely viewed as a basket of 100 growth stocks. The chart below tells us that we are beginning to break a trend channel and that the upward momentum is showing signs of an upcoming reversal. See below. 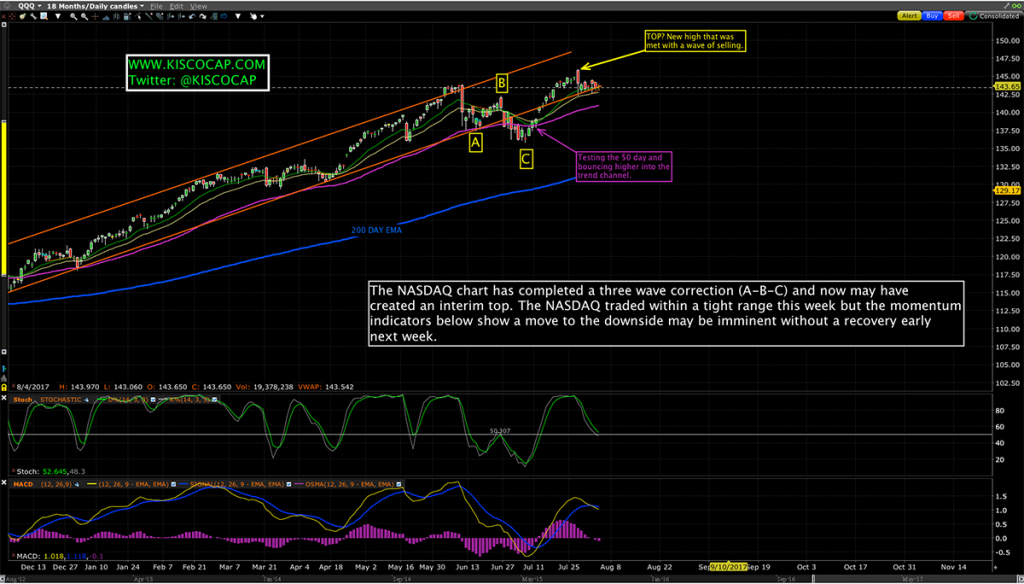 Now, let’s take a closer look at the Russell 2000 and you can see a distinct
technical pattern that implies lower prices. See commentary below: 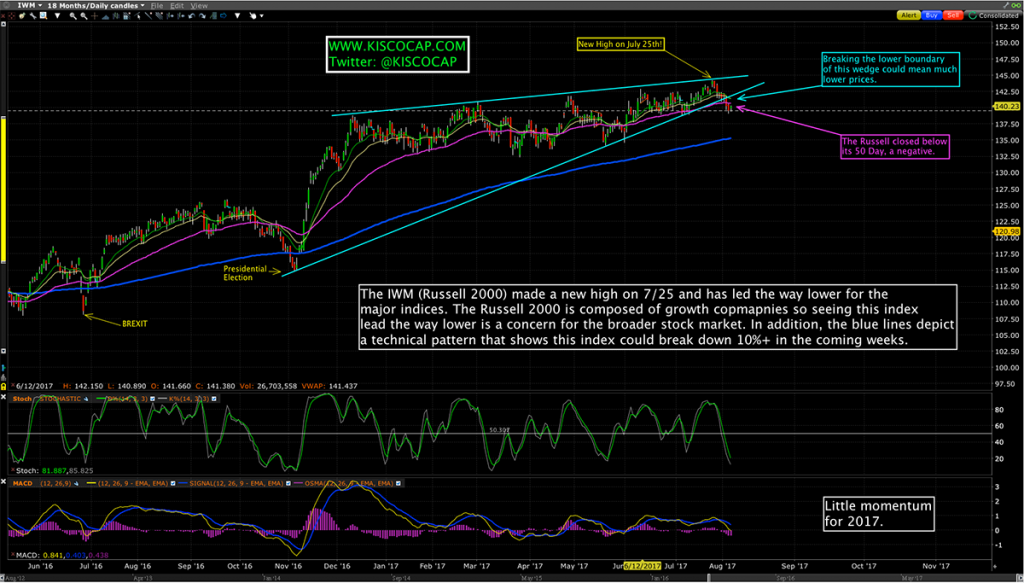 We are still in the midst of earnings season and although earnings have been good the price action has been less desirable. Remember, stock prices are forward looking and reflect what the market will do prospectively (6 months).
So, a good earnings announcement may be met with a lower stock price if the market thinks business may decline in the coming months. On average, shares of companies reporting earnings are falling by 0.78% on announcement day.
Companies that beat earnings estimates are rising by an average of 0.38%, while shares of those reporting negative surprises are dropping by an average of 3.43%. (Bespoke/WSJ)

One More Chart for the Bears

US stock market capitalization as a percentage of disposable personal income is approaching the dot-com peak. Notice that we are above the 2007 peak but not quite as high as the 1999 peak. (WSJ) 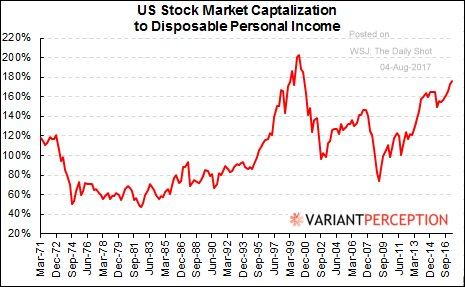 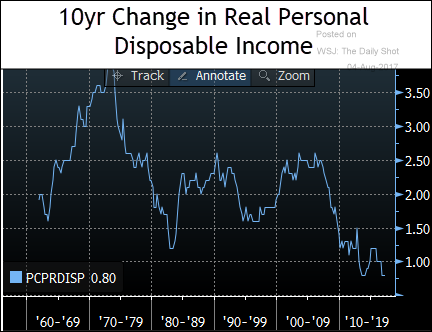 Trouble in neighboring Puerto Rico, which recently filed for a form of bankruptcy after a string of debt defaults, has investors worried that the U.S. Virgin Islands might be next. With just over 100,000 inhabitants, the protectorate now owes north of $2 billion to bondholders and creditors. That’s the biggest per capita debt load of any U.S. territory or state. The territory is on the hook for billions more in unfunded pension and healthcare obligations.

Ratings agencies have downgraded the islands’ credit ratings deep into junk territory. With the U.S. Virgin Islands shut out of the credit markets after a failed January bond issue, officials are scrambling to stabilize its finances.

Governor Kenneth Mapp is quick to reassure bondholders that they get first crack at one of the territory’s largest funding sources: rum taxes. The money pays debt service before heading to government coffers, a protection called a lockbox. “There was an idea that because of the lockbox structure and the fact that the territories did not have a path to bankruptcy, they had to pay you,” said Curtis Erickson, San Francisco-based managing director of Preston Hollow Capital, a municipal specialty finance company. That all changed in 2016 when Congress passed legislation known as PROMESA giving Puerto Rico its first access to debt restructuring (bankruptcy). Investors have quickly surmised the U.S. Virgin Islands might pursue the same strategy prompting a downgrade of its credit from BBB+ to B by S&P Global Ratings. 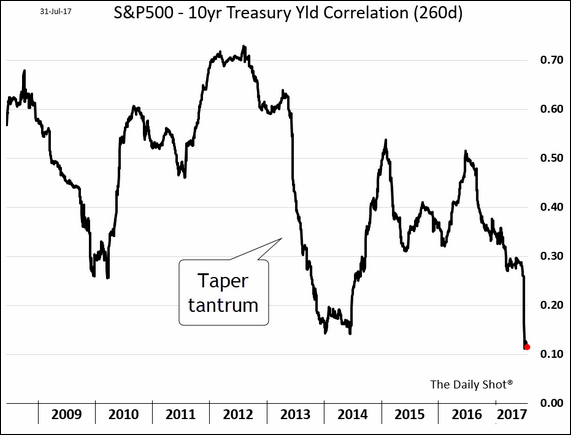 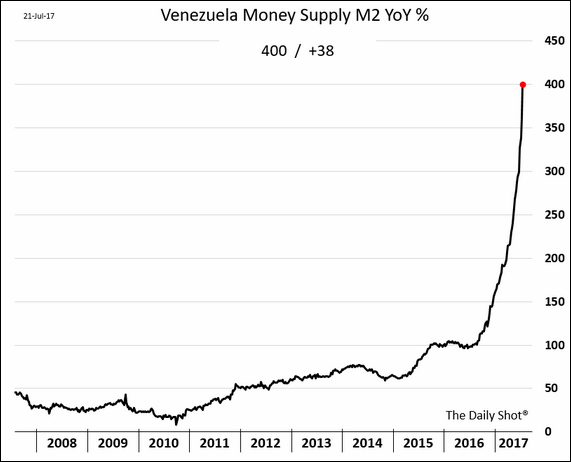