As part of the ongoing service I provide to my clients, I will be sending out a market update periodically based upon changes in current market technicals and/or fundamentals.

In October of 2014, the U.S. stock market broke its strong uptrend and went sideways until August of 2015, when stocks broke down precipitously. The market then tried to recover and make a new high but it fell short of this benchmark and is now testing the lows set last summer (see chart of the S&P 500 ETF ticker symbol ‘SPY’). 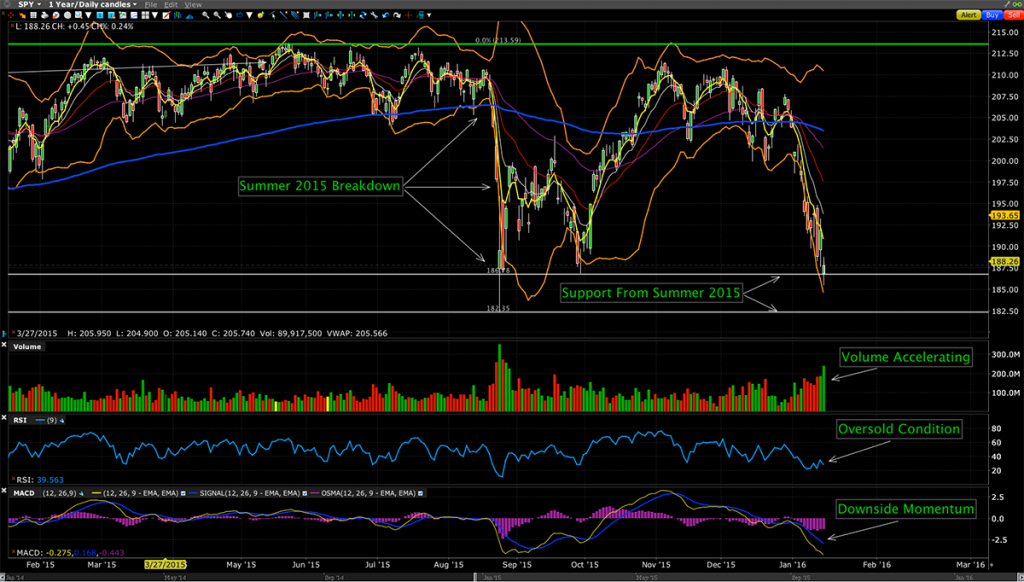 Many market technicians are already calling this a bear market due to the failure of the stock market to reach new highs in Q4. Bull markets have unfolded in five waves since the inception of the stock market, and this bull run since 2009 is no different (see Elliott Wave here). The wave theory currently indicates an end to the bull market, where 30-50% declines are common and typically coincide with a recession.

It doesn’t help that the Federal Reserve has chosen to raise interest rates in an economy that has been de-accelerating for the last 12-18 months. This scenario is unprecedented, as the Fed has always raised rates in an economy that has shown growth accelerating. I believe they have chosen to raise rates because their QE policy has failed to create sustainable growth and is creating distortions in how capital markets allocate their capital (just look at the energy and oil markets). 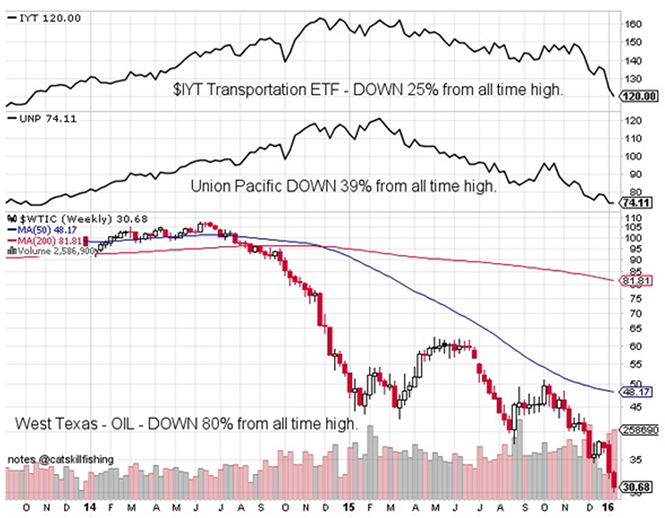 Strong headwinds exist with commodities prices collapsing and the Chinese economy looking recessionary. The effect of the Chinese economy on global markets is a new macroeconomic factor as they are now the 2nd largest global economy and their financial markets are extremely volatile. China was less of a factor in the last two bear markets (2000 & 2008) because their economy was much smaller. The China syndrome will play out over the next year, but I expect it to be largely negative since they have been the driver of consumption for commodities over the last decade.

Where do we go?

So, if we are in a bear market for U.S. stocks, where is the bottom and when do we get there? There’s no way to answer this question for sure, but we can look to technical analysis and charts to give us a clue. The previous downturn year in 2008 had a January where stocks sold off until the third week of January, rallied into the spring and then went sideways until the real selling began in October.

As you can see in the first chart, we are oversold and near a support level created last summer, so a bounce in the coming weeks is not out of the question. If we follow the script from 2008 and encounter selling later this year, how low can the U.S. stock markets eventually fall? 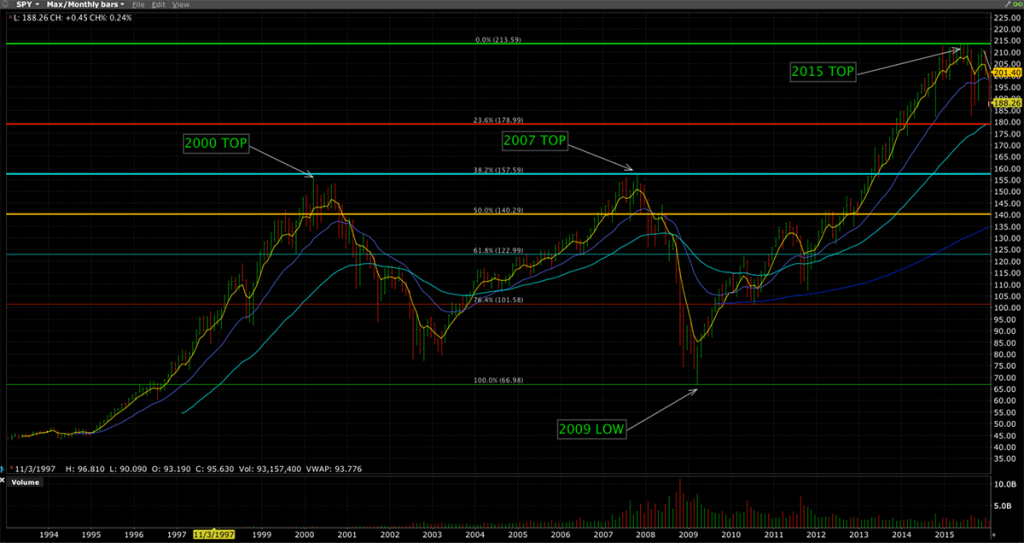 As you can see from the chart above, the 2000 and 2007 tops in the stock market reached the same level before they rolled over; this is called a “double top” in the world of charting and technical analysis. Using a Fibonacci grid from the 2009 low to the 2015 top, you can see that the 38.2% retracement level coincides exactly with the 2000/2007 tops. Too cute? Maybe, but keep in mind that the 38.2% retracement level is one of the most common retracement levels for stocks and it should act as a major support level. However, that would only be a 26.21% decline in stocks from the 2015 top, which is less than I would expect for the end of a bull run. For context, the 2000 peak took 30 months to decline 51.26%, while the 2007 peak took 17 months to decline 57.5%. That said, even if we are not in a bear market, the downside/upside risk is definitely skewed to the downside, given that the S&P 500 has rallied 300% since the 2009 low.

What do we do now?

Until January settles down, it is best to allocate capital to cash and high-grade bonds. Utilities look good since they act as bond proxies, but they may also suffer if there is forced selling due to liquidations; that could happen if we lose the low from last August. The support levels from last summer will tell us a lot about the next few months. If these levels do not hold, then we may be in for a very severe sell-off. The Fed will have another policy statement on January 26th, so the market may take a break from selling this week until Janet Yellen and her crew of merry policy makers can further muddy the waters for 2016. The Fed has backpedaled every time the stock market has gotten too volatile over the past two years, and I expect they will do the same at their next meeting. Could the Fed give us that spring rally like we got in 2008? Who knows, but it wouldn’t surprise me.

I have to keep agnostic when it comes to the prices of stocks and bonds, but I think that 2016 will be a year of preserving capital. Stocks may be good for a trade, but we are a far cry from the last good trend year of 2013. More to come after the Fed meeting.